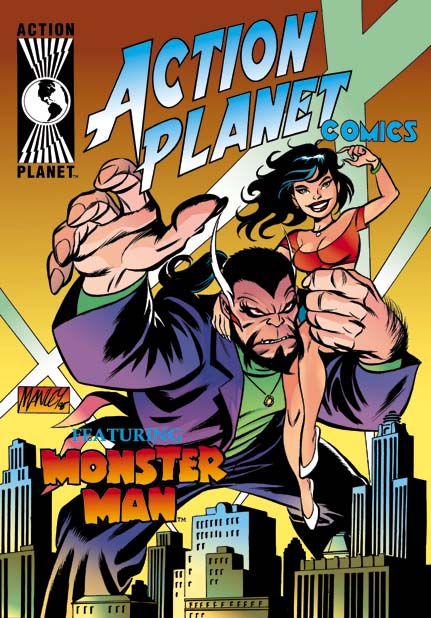 Kirk Armstrong had everything going for him, a great job as a fantasy model, sculptor, and theme park consultant. A beautiful girlfriend, Terri, daughter of Olympus Oak's biggest industrialist, Edelton Marsh. Everything was just peachy . . .

Until the day his eccentric Uncle Zachariah Armstrong mysteriously disappeared, leaving him in possession of the oldest and scariest mansion in the city, the Cobb House, full of his missing uncle's collection of bizarre art and sculpture. Everything was looking up until the day he entered his uncle's study, and found a mysterious intruder. In a battle with the mysterious stranger Kirk was wounded in the heart by a piece of a 3000-year-old statue. A statue cursed with the power of a thousand monsters and demons.

Now he's a man in constant battle for control of his soul with the demonic power of the shard, which lies in his heart. A power which transforms him into a MONSTERMAN, the man with the power of a thousand monsters. He travels the world, a magnet for monsters, demons, the strange, occult and bizarre in search of adventure and possibly a cure for the curse.

Mike Manley has expanded his Action Planet Network on the web, by adding MONSTERMAN.NET, the official internet home of his character, Monsterman, who first appeared in the pages of Action Planet Comics.

Monsterman.net will feature Flash animated cartoons and a daily comic strip starting in the winter of 2000, featuring the adventures of Kirk Armstrong the Monsterman, "The Man with the Power of a 1000 Monsters".