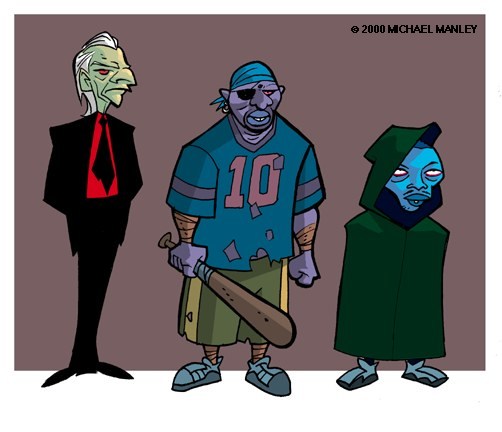 In the future the world has grown so crowded, only the super rich can afford private burial on the earth. Those who can afford to bury their loved ones, bury the dead on an artificial moon orbiting the earth called, Heaven, by the UN mandate of 2156. The world was also created, controlled and run by Sutherland. A multi-national corporation run by Hax Sutherland from the sovereign nation state of Sutherland. A man made island 300 miles wide in the south pacific.

The artificial moon is also rumored to be haunted by Zergs. Zombie vampires.

In the future celebrity is even more the rage than it is today, and the best thing about that is you can be one yourself, even if you have no talent.

The Celebrity face, a device invented by the Sutherland corporation, implanted under the skin and muscle of your face, gives the user shape changing abilities so he or she can look like your favorite movie starts and celebrities.

A designer drug called Zero was developed to help block the pain on the facial and body contortions and also give the user a super dose of endorphins. Making you feel better the more you ware your "Celebrity Face".

When a group of "twenty somethings" discover a secret about the drug, that long term use can turn your into a Zerg, they are kidnapped by Sutherland and abandoned on Heaven , the artificial world of dead people, and given an exoctic dose of Zero. The only hope of survival is to escape from an artificial world of Zombies orbiting the earth, and track down an antidote or spend eternity a lifeless zombie.